On the recommendation of the World Health Organization annually 10 September is considered World Suicide Prevention Day. This day is intended to attract the attention of both government officials, medical professionals, organizations and institutions of various departmental affiliation, public and religious organizations, and individual citizens to the problem of suicidal behavior.

The global goal of World Suicide Prevention Day is to reduce the suicidal activity of the population (decrease in suicide rate).

Suicide prevention is an integral part of the state's demographic security policy. 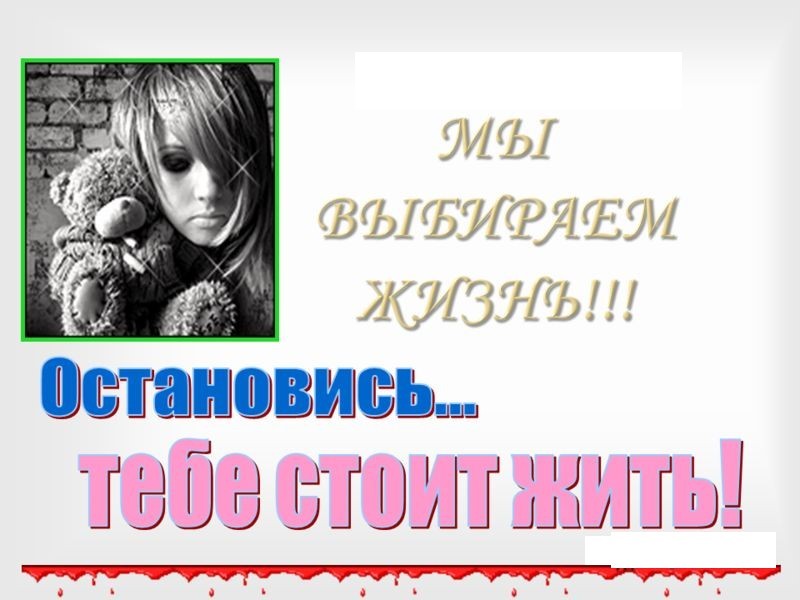 Суициды являются актуальной медико-социальной проблемой в большинстве стран мира, they make up 50% all violent deaths in men and 71% among women. Suicide is especially common in age 45 years and older, they are the second leading cause of death among young people aged 15-29 globally. The elderly and adolescents are at increased risk.. According to WHO, suicide is the 13th leading cause of death worldwide. AT 2012 g. 804 thousand. people all over the world committed suicide, which gave an annual death rate from suicide of about 11,4/100000 person. However, since suicide is a rather delicate problem, very likely, that these figures are underestimated. There is reason to believe, that the reported suicide rate is underreported by 20%, and in some regions of the world – on 100% as a result of prevailing social or religious attitudes towards suicide.

Suicide is a very significant economic problem. World economic losses from suicide in 1998 made up 1,8% the global burden of disease and could amount to 2,4% to 2020 city, if the number of people, deaths from suicide will reach 1530000 in year.
AT 25 countries of the European Union for suicide among persons before 75 years had 30% YLL due to external reasons; the main "contribution" of deaths occurs due to suicide in 20-55 years at the peak of social life.

People began to commit suicide in primitive times., which is confirmed by anthropological research. At the same time, suicide was initially prohibited among some peoples.. In some communities, suicide was not a crime, in others, suicide attempts were punished, and in the third, suicides were committed as part of the implementation of religious rites and cults. So, in the tribes of some African countries (Uganda, Kenya) person, suicidal,

deserves punishment (if suicide is committed by hanging from a tree, his house is given a cleansing fire, and the relatives of the deceased are prohibited from approaching the corpse).

In ancient Greece, few could voluntarily commit suicide, and those sentenced to death were allowed to choose the method of suicide. So, philosopher Socrates was not executed by the executioner, and took poison myself. Suicide, unauthorized, punished with posthumous disgrace (eg, in Athens and Thebes, a suicide's hand was cut off and buried separately).

In the Middle Ages, suicides were treated extremely negatively: they were equated with criminals (England), bodies burned (Denmark), property was confiscated (France). In a later era, suicides were not considered criminals, and persons with a mental disorder.

Subsequently, many countries began to abolish the legal liability of suicides. (France was the first to do this at the end of the 18th century). At the same time, in the UK, suicide was considered a crime before 1961 of the year, in Ireland - before 1993 of the year, and in India -
to 2014 of the year. Some countries still criminalize suicide. for example, in Singapore, a person for attempted suicide is punishable by up to one year in prison and / or fine.

In Russia, suicide was considered a crime according to the article of the military 1715 of the year, where it was fixed, that “if someone kills himself, then the executioner should drag his body to a dishonest place and bury it… If Saldat wanted to kill himself, and in that he was prevented, I could not do that, but it will do it out of torment and annoyance, not to live anymore, or unconscious and shame, which, in the opinion of the teachers, is right with dishonor from the regiment. And if, in addition to the above-mentioned parables, he did this, he should be executed by death ".

Every year the problem of suicide is becoming more and more global., and suicidal attempts are increasingly becoming a form of behavior, which a person resorts to in a crisis situation.

This problem became especially urgent at the turn of the XX-XI centuries..

According to the report of WHO experts, a year on the planet is fixed about 1 million. suicides, what is 16 cases on 100.000 population or 1 case every 40 seconds.

For the last 45 years of the twentieth century, the average world suicide rate increased by 60%.

Of 10 the world's leading countries in terms of this indicator 9 located in Europe.

In the Republic of Belarus:

in the total number of deaths from all causes decreased from 1,5% to 1,3%;

in the total number of deaths from external causes decreased from 22,6% to 21,4%.

– at 2019 g. versus 2018 g. indicators of suicidal activity of the population decreased in 4 out of 5 populations:

in the population of working age committed 72,0% of the total number of suicides;

in the population over working age committed 27,0% of the total number of suicides;

in the child population is perfect 1,5% of the total number of suicides.

– suicide, along with cardiovascular, cancer and injury are the most common causes of death, especially citizens of working age.

Suicide is a phenomenon, only found in humans, is a social phenomenon and, to a certain extent, depends on the structure and well-being of a particular society, Moreover, it is an individual personality reaction to a conflict (crisis) the situation, which is determined by the personality characteristics of a particular individual and is found in any society, regardless of its political and socio-economic structure.

Suicide – this is a deliberate taking of one's life. Suicide attempt (parasuicide) – this is intentional self-harm, non-lethal. Parasuicide can be one of the options for blackmailing behavior to attract or regain lost attention, sympathy of loved ones and others, as well as getting rid of punishment.

By definition, suicide means the act of suicide, committed by a person in a state of severe mental disorder or under the influence of mental illness or as a deliberate act of elimination from life under the influence of acute traumatic situations, in which one's own life as the highest value loses meaning for a given person.

According to the World Health Organization, in the world annually as a result of suicide about one million people die, Moreover, takes place about 7 million suicide attempts.

It should be noted, that statistics do not reflect all suicide cases. So, some of the dead are not found, some cases of suicide are mistakenly regarded as death by accident, eg, when drowning, some of the suicides were actually murders in disguise, in some cases, relatives of victims of suicide, for ethical reasons, try to hide the true cause of death.

Suicide prevention is challenging, but a feasible complex non-medical task, to achieve which in the Republic of Belarus the efforts of many organizations are united.

Suicidal behavior – this phenomenon, having a philosophical, psychological, medical, psychiatric, religious and other components. It includes a completed suicide, suicidal attempts (assassination attempts) and intentions (ideas). Attempted suicide, when the person survived (so-called parasuicide), may be the result of an accidental failure or, that the suicide had no real desire to die. At the same time, practice shows, that many of those who committed suicide had previously attempted suicide, therefore parasuicides should be taken very seriously. The killing of themselves by children under the age of 5 years old, as well as persons, unaware of the meaning of their actions or their consequences, not recognized as suicide.

There is no single reason for suicidal behavior. In different countries, rates of suicidal activity fluctuate significantly depending on the region, climatic and socio-economic living conditions, the political environment, national and cultural characteristics and traditions, religious attitudes.

For many years, the Republic of Belarus has been carrying out planned versatile and multi-level work to prevent suicidal activity of the population, uniting the efforts of the state and society.

The state pays great attention to the preservation and strengthening of the mental health of citizens. Providing psychiatric, narcological, psychotherapeutic and psychological assistance in the Republic of Belarus is carried out by a network of health care organizations at various levels of medical care (district, городском, областном, республиканском) в амбулаторных, стационарных условиях, а также в условиях отделений дневного пребывания.

unusually dismissive of your appearance;

impaired attention with a decrease in the quality of work performed;

immersion in thinking about death;

no plans for the future;